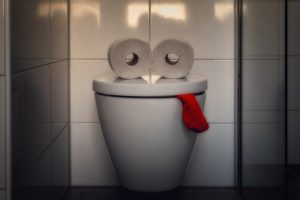 One of the worst things that can happen with a bathroom fixture is a clogged toilet.

One of the worst things that can happen with a bathroom fixture is a clogged toilet. It is a particular sort of anxiety that mounts as the water in the toilet bowl rises instead of falls when you flush a toilet. The resulting flood, if it overflows, will be both disgusting and potentially disastrous. And a toilet that clogs frequently could be a sign of a much deeper problem. Read on for five causes of a clogged toilet beyond the obvious reason of too much paper.

The fill valve is part of the tank of the toilet. It controls how the tank refills after it is flushed. When the fill valve malfunctions, it can cause the toilet to run constantly. A faulty fill valve can also lead to a tank that doesn’t fill all the way. If you don’t have a full tank when you flush, you won’t have as much flushing power, and the toilet may clog.

If something was flushed that shouldn’t have been, like a small toy or a sock, it could be causing a blockage in the pipes leading from the toilet. This blockage, in turn, is backing up the toilet so that it doesn’t flush correctly. If the flush force is not enough on its own to clear the blockage, everything will back up until you get a plumber to fix the issue.

This issue is the big scary one for most people. Chronic toilet backups could be the sign of a sewer issue. More often than not, a major sewer issue will affect more than just the toilet. If you have backups in multiple fixtures, have a professional plumber check your sewer line.

The Toilet Is Old

Finally, older toilets are more prone to clogs. If the toilet backing up is old, even as little as ten years old, it may be time to replace it. Toilet efficiency has come a long way in the last decade, so the new toilet may quickly pay for itself in water conservation.

Categories: Plumbing maintenance | Tags: maintenance, plumbing, and toilets
This entry was posted on Friday, February 5th, 2021 at 10:52 am. Both comments and pings are currently closed.