4 Items to Avoid Throwing in the Kitchen Drain 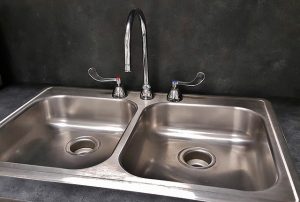 Is your kitchen drain blocked?

Have you detected a foul smell in your kitchen? The sink drain could be clogged or blocked. If that’s the case, then you’ll probably also see a lot of standing water because your drain won’t empty. Here are some things you shouldn’t put down the drain.

Take a second to think about the condition of the kitchen drain and the garbage disposal hidden under the drain. Whenever you’re washing dishes, the sink starts to fill up with water. You think that’s okay, I’ll just run the disposal again. So you do, but then you hear a loud grinding sound. Looks like you put the bones from tonight’s chicken dinner in the drain and the disposal let you know about it. Never put bones in your kitchen drain. It’s one of the few things that the garbage disposal won’t be able to process.

Likewise, avoid tossing vegetables in the kitchen drain. The drains aren’t equipped to accept carrot peels, potato skins, and bits of celery. They might come together to create a tasty soup, but they shouldn’t end up inside your drains.

We’ve already named two other types of food debris. However, to avoid future clogs, don’t put coffee grounds down the drain. It will contribute to the garbage disposal breaking down, which will cause more headaches for you.

F.O.G. stands for fats, oils, and grease. They are often poured down drains when they’re still hot, which doesn’t sound like a problem at first. Once they cool off, however, it’ll solidify and form a blockage inside your pipes that you won’t be able to see. What you should do instead is put these substances into a separate container, let them cool down, and then dispose of them properly. By doing that, you can prevent future issues with your kitchen drains that you might not know how to fix.