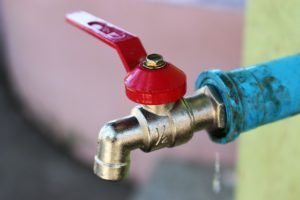 The location of your water shut-off valve varies depending on geographic location, the type of building you’re in, and the type of water source you have.

There are usually two major reasons that you need to shut off the water in a home, aside from leaving it for a good period of time: when you remodel your bathroom or kitchen, or when you have a plumbing emergency. The former is pretty mundane when compared to the latter, which is made even more stressful if you don’t know how to turn off your water or even where the shut-off valve is. Hopefully, this isn’t a knowledge gap that you discover when your toilet is actively overflowing and flooding your bathroom or your hot water heater has burst. If there was one universal location for all shut-off valves, this would be less complicated, but unfortunately there isn’t. Instead the location varies depending on geographic location, the type of building you’re in, and the type of water source you have.

There are actually going to be many shut-off valves in your home, but only one that shuts off all of the water to the entire house. The other ones are going to be on the pipes that lead to major appliances, like the dishwasher, toilets, water heater, and sinks. These are usually knobs that are located under or behind the appliance, and turning them will shut off the water directly to that appliance (and remember, “righty-tighty”).

If your water comes from a city source, the main water line to the house likely comes in through the foundation in the direction of the street. Most often, this is in the same area as the furnace (like a utility room or the same corner of the basement). This pipe should also be the biggest one that you see and it will have a shut-off valve before any pipes branch off of it. In warmer climates (where there is less worry of freezing pipes), the shut-off valve is likely located out in the yard. Somewhere in the front of your house, near the street, there will be a concrete or plastic utility box, and the shut off valve will be in there. If you can’t find it, it’s likely that it has been covered by dirt because it is so rarely used. A professional plumber would be able to tell you where it is easily.

If you have well water, you will actually have two shut-off valves. The first is between the well and the pressure tank, possibly even buried in the ground in a utility box. The other is between the pressure tank and your plumbing, likely on the same pipe as your pressure gauge. Either can be shut off, unless you’re worried about freezing pipes, in which case both should be shut off.

Give Master Plumbing a call at (301) 650-9100 or contact us online to get more information on how our expert plumbers can help you with your dripping faucet (or just about anything else plumbing related!). We have received Angie’s List Super Service Award recognition for plumbing and drain cleaning every year since 2007, in addition to the Best Plumber award from Best of Bethesda. We are fully licensed, bonded, and insured and our service is unparalleled. Give us a call today—you won’t regret it! To see examples of our projects, follow us on Facebook, Twitter, and Pinterest.

Categories: Plumbing | Tags: avoid plumbing problems, plumbing, and plumbing maintenance
This entry was posted on Monday, August 26th, 2019 at 9:45 am. Both comments and pings are currently closed.