What to Do About Leaking Garbage Disposals 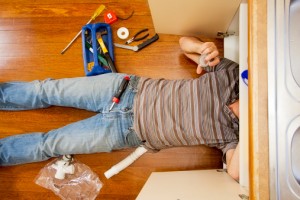 Garbage disposals are hugely important parts of your kitchen sink system. But when something goes wrong with it, you’ll know. That’s because there will be a truly awful smell coming from the sink. If that’s the case, then you have a leaking garbage disposal. Here’s what to do about it.

For one thing, the sink flange might be too worn down. If you’re not sure what a sink flange is, it’s the piece that connects the drain of the sink with the garbage disposal itself. Another potential source of the leak is when the drain pipe malfunctions. The drainpipe going haywire is bad because that’s how water and bits of food are carried away under normal circumstances.

Where is the Leak?

The next problem is finding the source of the leak. If the dishwasher hose is the problem, then all you need to do is replace it. If that’s not the problem, you’ll need to investigate the other potential suspects and use the process of elimination to narrow it all down. Start by drying off the flange. Then plug a stopper into the sink’s drain and add a couple of inches of water to it. If there is unexpected moisture on the flange, then it’s a sign of a leak. If there’s no drippage, then move the flange out of the way along with the plug.

Faulty garbage disposals will need professional expertise to fix. However, it could be that the pipes need to be fixed first. In either case, you should call a plumber to come and inspect it before you make any final decisions.